ISSUE On 15 June 2020, PostNL will publish the Typically Dutch – bitterballen stamp sheet. The issue is the fifth of the new Typically Dutch series, which follows the Beautiful Netherlands (2005-2019) series. The six identical postage stamps will be marked ‘Nederland 1’, the denomination for items up to 20g in weight destined for the Netherlands. The Typically Dutch – bitterballen issue was designed by graphic designer Edwin van Praet of Total Design in Amsterdam. The photographs were taken by Scrambled Media, also based in Amsterdam. This issue is the last one in the Typically Dutch series this year. Earlier stamps featured the smoked sausage (2 January), carrots (24 February), hagelslag (23 March) and the tompouce (6 April).

SUBJECT This year, the Typically Dutch series focuses on foods and dishes that are typical for the Netherlands. This fifth issue focuses on the bitterbal, a staple served with other deep-fried snacks at receptions and in cafés. Bitterballen are deep-fried balls with a diameter of approx. 4 cm that are filled with a thick white sauce that usually contains meat. This round version of the croquette used to be eaten to accompany a “bittertje”, a strong alcoholic herbal drink such as gin, hence the name bitterbal. This snack, usually eaten with mustard, is very popular in both the Netherlands and Belgium. The bitterbal is also known in Surinam and Indonesia, but nowhere else. 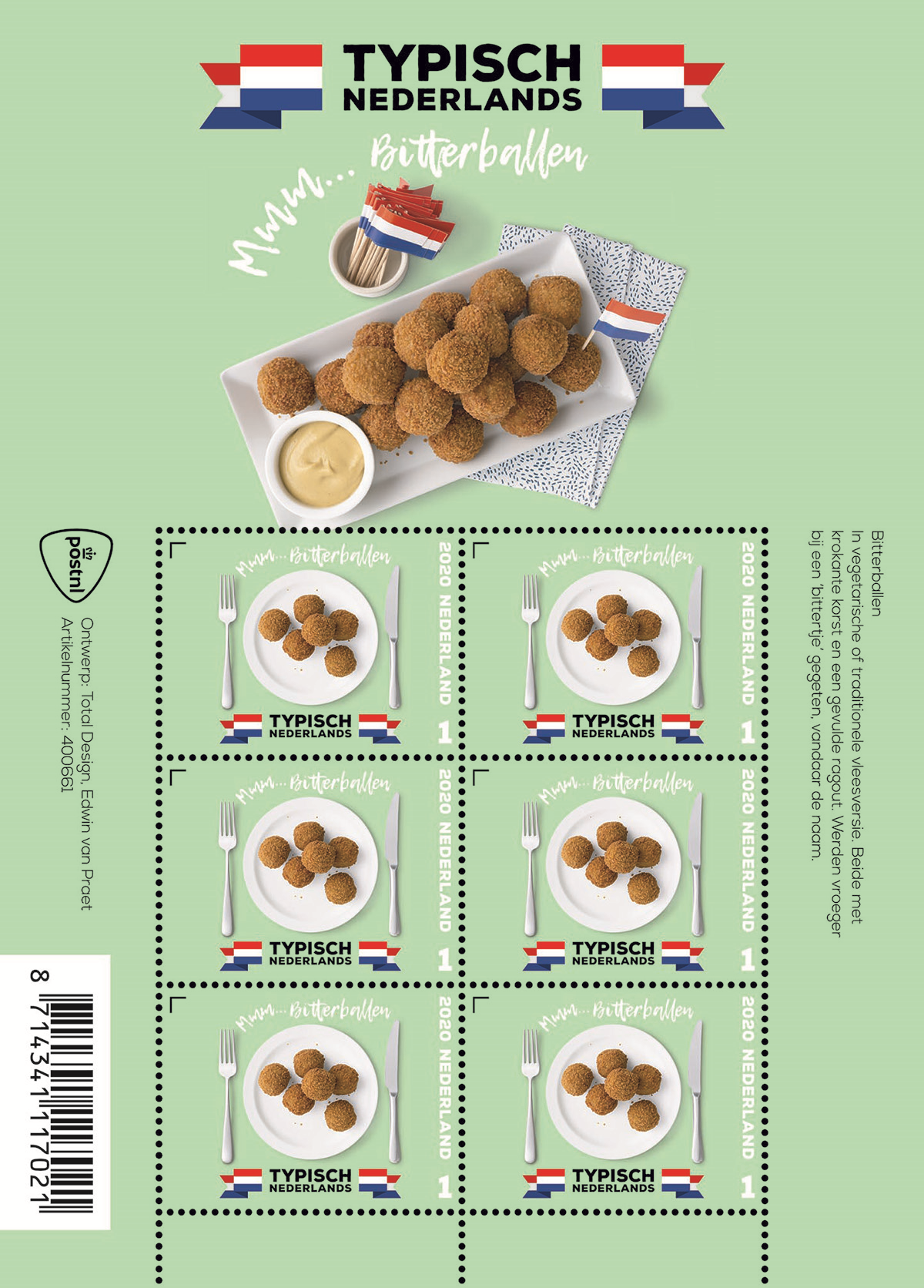 The first mention of a bitterbal can be found in a dictionary from 1946. In the Woordenboek der Nederlandsche Taal, the bitterbal is described as a “deep-fried ball of spiced meat ragout, with a breaded, crunchy exterior, usually served as a snack with a drink.” Vegetarian bitterballen are also available nowadays. The bitterbal is a youngster compared to the croquette (known as kroket in Dutch). Connoisseur and culinary reviewer Johannes van Dam found out that it was first mentioned way back in 1691, when croquettes were already being made for the French king Louis XIV. The first printed Dutch croquette recipe is from 1851.

DESIGN The Typically Dutch – bitterballen stamps feature six bitterballen, lying on a white plate with a knife and fork on either side. The bitterballen are nicely distributed across the plate, 1 is lying on top of 3 other bitterballen. The logo for the Typically Dutch series is printed underneath the plate, including a folded Dutch banner on the left and right. The words Mmm… Bitterballen are printed in a strong cursive font above the plate. The year (2020), country (Nederland) and denomination 1 are printed on the right-hand side of the stamp. The sorting hook is in the top left-hand corner. The background colour of the stamps is blue-green, just like the colour of the sheet edge. The bitterballen return on the top part of the sheet edge, in larger numbers and displayed on a square dish with a raised rim. A small bowl with mustard has been added. Next to the dish is a container holding cocktail sticks with Dutch paper flags. The series logo, including the Dutch flag, returns above the image. The right-hand side of the sheet contains a short description of the bitterbal and on the left there is space for the logo, name of the designer, item number and barcode. 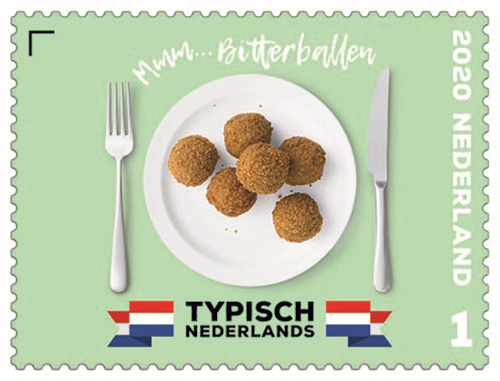 TYPOGRAPHY The Nexa Thin and Nexa Rust (Svet Simov, Fontfabric, 2012) fonts have been used for the text on the stamps and stamp sheet. For the words Mmm… Bitterballen, the Lemon Tuesday (Daria Kwon, Dafont, 2016) font was used.

DESIGNER The Typically Dutch – bitterballen issue is the fifth in a new series that PostNL is publishing this year. The design was produced by graphic designer Edwin van Praet from Total Design. Typically Dutch follows the Beautiful Netherlands series, which PostNL published for 15 years.

In the new series, PostNL focuses on typically Dutch customs, products, dishes and customs. “In this first year, the focus is on authentic Dutch dishes and food,’ says Edwin van Praet. “After the stamps featuring smoked sausage, carrots, hagelslag and tompouces, the fifth issue focuses on bitterballen. PostNL asked us to produce a design for Typically Dutch with potential for the future: a basic design that would be suitable for all of the subject matter. It had to be an accessible design that would appeal to everyone, does not hinder the design process and offers plenty of room for creativity – whether that’s with photos, illustrations or graphic solutions.’

The search resulted in long lists of potential subject matter, with different types of designs. Van Praet translated them into various designs that were then submitted to PostNL. In all of the designs, the dishes and food such as the bitterballen on this fifth issue were given a prominent place on the stamps. The logo of the new series, with its red, white and blue banner, soon became a permanent feature. And so did the expression Mmm… Bitterballen, with a handwritten font just like one you find on a chalkboard in the kitchen.

PostNL unanimously selected the design based on nostalgic photography. During the development process for this concept, Van Praet initially used stock images. However, this did not work so well because the photographs differed from each other too much in terms of quality and style. Instead, Total Design called on the specialist food photographers and stylists at the Amsterdam-based agency Scrambled Media. Van Praet: “I love bitterballen, of course, so I was delighted that we were allowed to include this snack in the series. The bitterbal is a true tradition at parties and in cafés. But we wanted to also reflect the spirit of the current times in addition to this tradition. That’s why we chose vegetarian bitterballen. You can’t see it from the outside, but it’s true! We tested the number of bitterballen to put on the stamp ad nauseam. It was essential not to have too many; it should be possible for one person to eat them all. We finally picked six, that was the most playful variant. With one bitterbal on top of three others to add depth.”

The plate used has a neutral appearance, it is an off-white colour and is not too deep. “It really shows off the bitterballen,” explains to Van Praet. ‘The same goes for the knife and fork. Not that modern Scandinavian cutlery is all that trendy these days, but the knife and fork have a traditional, inconspicuous design. We have managed to sneak some in. Forks are usually slightly smaller than knives, but that wouldn’t have worked in terms of composition. The grid of the image on the stamp consists of a circle within two squares. In order to achieve perfect squares, we made sure that the knife and fork looked like they were the same length. The grid fits inside the rectangular shape of the stamp, which you could see as a placemat. The smallest placemat in the Netherlands.’

A nod to that tipple

The blue-green colour of both the stamps and the edge of the sheet is based on the blue of the paper napkin on the sheet edge. The sheet edge features the type of dish on which bitterballen are usually served. “We loaded it with bitterballen, with a cocktail stick already stuck in one of them, ready to grab. Because that’s how they are usually served. The small dish contains honey mustard, which is a little lighter in contrast with the dark brown bitterballen. We considered putting a glass of tipple (that ‘bittertje’) next to it but the connection between ‘bitter’ and bitterbal disappeared a long time ago. That’s why we used that familiar little container with cocktail sticks instead. The container is made of glass, as nod to that tipple. When photographing we paid special attention to the granular structure of the bitterballen. That’s also the reason why the dish has a neutral white colour. It makes the granules on the bitterballen on both the dish and the plate more visible. I know plenty of people who pick them up with the tip of a finger afterwards. It goes without saying that we had a little taste of those vegetarian bitterballen during the photo session. That’s also one of the great things about working with Scrambled Media. All of the dishes and food they photograph are eaten after the shoot. They are sometimes donated to a food bank, for example.’