ISSUE On 24 February 2020, PostNL will publish the Typically Dutch – carrots stamp sheet. This is the second issue in the new Typically Dutch series, which follows the Beautiful Netherlands (2005-2019) series. The six identical postage stamps will be marked ‘the Netherlands 1’, the denomination for items up to 20g in weight destined for the Netherlands. The Typically Dutch – carrots issue was designed by graphic designer Edwin van Praet of Total Design in Amsterdam. The photographs were taken by Scrambled Media, also based in Amsterdam. In 2020, PostNL will issue five stamp sheets in the Typically Dutch series. The rookworst sausage stamps issued on 2 January and the carrot stamps issued on 24 February will be followed by hagelslag sprinkles stamps on 23 March, tompouce custard slice stamps on 6 April and bitterballen cocktail croquette stamps on 15 June.

SUBJECT This year, the Typically Dutch series focusses on traditional Dutch foods and dishes. This second issue features carrots. Like celery and parsley, carrots are a member of the Umbelliferae family. One of the main reasons why carrots are so popular in the Netherlands is because they are orange. This was not always the case. Carrots were originally white, yellow, red and even purple. In the 16th century, farmers in the Low Countries deliberately started developing orange carrots. For a long time it was thought that the farmers did this to show their support of William of Orange, However, recent research suggests it may simply have been a fad, or a way for the growers to assert ownership. 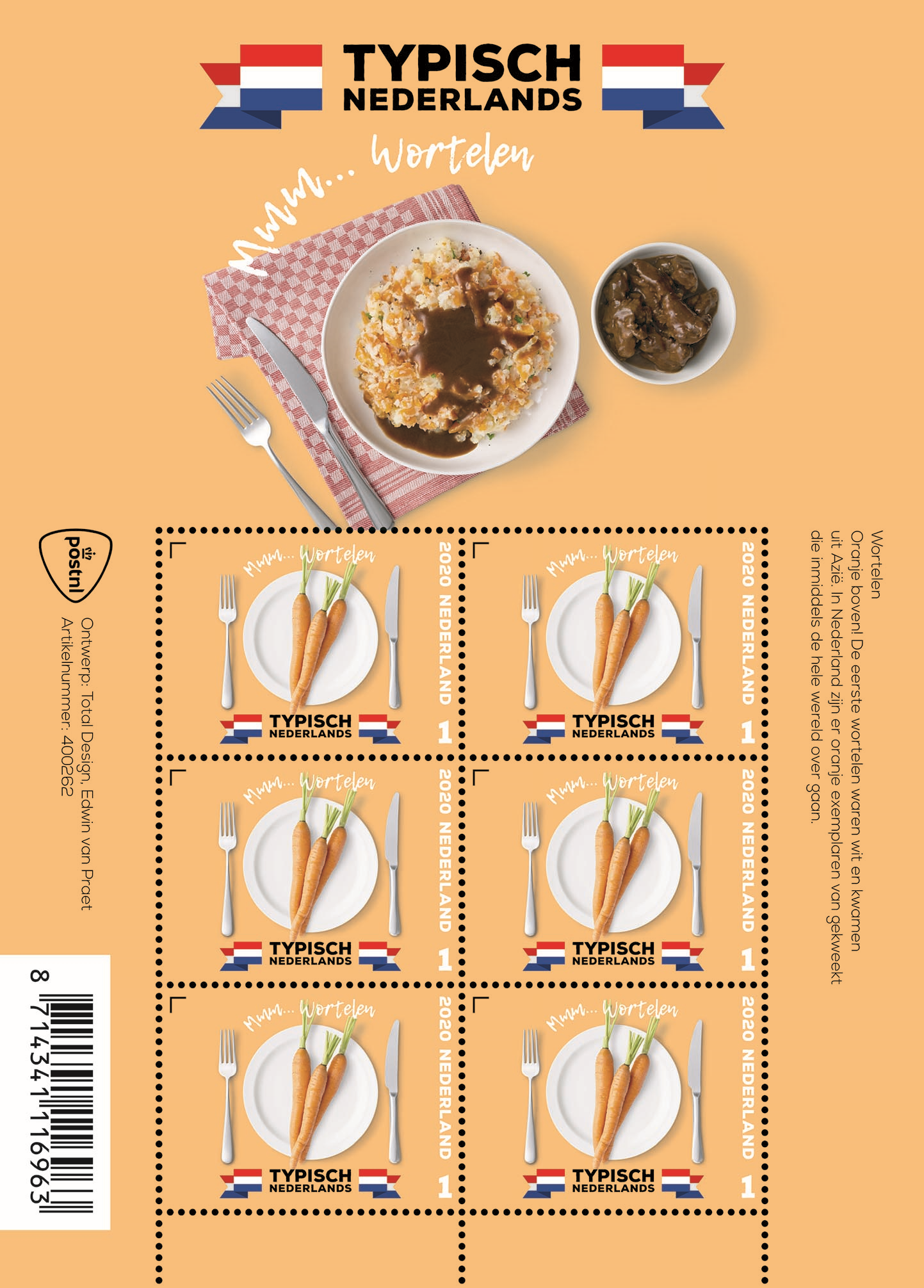 Later, orange carrots were clearly bred in support of the House of Orange. Most wild carrots are white, but domesticated varieties come in a range of colours. Carrots are a biennial plant. In the spring of the first year, the carrot plant produces an edible fleshy root. If the root is left in the ground during the winter, in the spring of the second year the plant produces flowers. Carrots grow best in sand, especially in chalky and loamy sandy soils. The soil needs to be deeply dug. It also needs to be very loose and light in structure. Carrots can be left in the ground in the winter until they are harvested. Varieties include bunched carrots, washed carrots, Nantes carrots, which are harvested from late summer, winter carrots and spherical Parisian carrots. Except for the spherical carrot, hybridisation has blurred the distinction between the different varieties.

DESIGN The Typically Dutch – carrots stamps show three orange carrots with leafy tops lying on a white plate flanked by a knife and fork. The logo for the Typically Dutch series is printed beneath the plate with a folded Dutch banner left and right. Above the plate, the words Mmm… Wortelen are printed in a strong handwritten font. The year (2020), country (the Netherlands) and denomination 1 are printed on the right-hand side of the stamp. The sorting hook is in the top left-hand corner. The background colour of the stamps and the surrounding sheet is pastel orange. At the top of the sheet, the carrots reappear mashed with potatoes and onions in a hotchpotch with a well of gravy on a deep round plate. On the right there is a matching bowl of braised meat. The plate of hotchpotch sits on a red and white check tea towel. Next to it there is the same cutlery as on the stamps. The series logo and the Dutch banners return above the image. The right-hand side of the sheet contains a short description of the carrots. On the left there is space for the logo, the name of the designer, the item number and the barcode.

TYPOGRAPHY The Nexa Thin and Nexa Rust (Svet Simov, Fontfabric, 2012) fonts were used for the text on the stamps and the sheet. For the words Mmm… Wortelen the Lemon Tuesday (Daria Kwon, Dafont, 2016) font was used.

DESIGNER The Typically Dutch – carrots issue is the second in a new series that PostNL is publishing this year. The design was produced by graphic designer Edwin van Praet of Total Design. The Typically Dutch series follows the Beautiful Netherlands series, which PostNL published for 15 years.

In the new series, PostNL focuses on Dutch customs, products, dishes and traditions. “In this first year, the focus is on authentic Dutch dishes and food,” says Edwin van Praet. “After the set of rookworst stamps, this sheet focuses on carrots. PostNL asked us to produce a design for Typically Dutch with potential for the future: a basic design that would be suitable for all of the subject matter. It had to be an accessible design that would appeal to everyone, does not hinder the design process and offers plenty of room for creativity – whether that’s with photos, illustrations or graphic solutions.”

The search resulted in long lists of potential subject matter, with different types of designs. Van Praet translated them into various designs that were then submitted to PostNL. In all of the designs, the dishes and food such as the carrots in the second issue were given a prominent place on the stamps. The logo of the new series, with its red, white and blue banners, quickly became a permanent feature. So did the expression Mmm… Wortelen, with a handwritten font just like one you find on a chalkboard in the kitchen.

PostNL unanimously selected the design based on nostalgic photography. In the development process for this concept, Van Praet first used stock images. However, this did not work so well because the photographs differed from each other too much in terms of quality and style. Instead, Total Design called on the specialist food photographers and stylists at the Amsterdam-based agency Scrambled Media. Van Praet: “During the photo session, we tested various carrots for the stamps. Large ones, small ones and, of course, winter carrots. Needless to say, they were all orange, although today there are also different coloured carrots in the shops. It turned out that the medium-sized carrots worked best. We placed them close together, so they form a heart. And we scraped them well first to make the orange colour even more vivid. We also left a bit of greenery on them, because it combines nicely with the orange.”

The plate used has a neutral appearance, it is an off-white colour and is not too deep. “The carrots really come into their own,” says Van Praet. “The same goes for the knife and fork. Not that modern Scandinavian cutlery is all that trendy these days, but the knife and fork have a traditional, inconspicuous design. We managed to sneak some in. Forks are usually slightly smaller than knives, but that wouldn’t have worked in terms of composition. The grid of the image on the stamp consists of a circle within two squares. To achieve perfect squares, we made the knife and fork the same length. The grid fits inside the rectangular shape of the stamp, which you could see as a placemat. The smallest placemat in the Netherlands.”

Van Praet wanted to create a tone-on-tone effect by using a pastel orange colour derived from the orange carrots for both the stamps and the sheet edge. The carrots on the stamp were arranged as a heart shape on the plate and photographed by Scrambled Media. With the image on the sheet edge, Van Praet allowed himself much more freedom, he explains. “There we see the carrots mashed together with potatoes and onions in a hotchpotch. We experimented with different ways of making hotchpotch. If you mash it too thoroughly, you can’t see the carrots. The gravy was probably the most difficult thing to photograph. We kept trying until we got the right sheen and thickness so the gravy also trickled down over the hotchpotch. The colour of the dark brown braised meat in the bowl forms a nice contrast with the pale modern crockery, which sits on a traditional red and white check tea towel. A tad nostalgic, but hotchpotch is still very popular. That was also clear during the photoshoot – it smelled amazing. It’s all photographed as is – no tricks were used to make it look nicer. That’s also one of the great things about working with Scrambled Media. All of the dishes and food they photograph are eaten after the shoot. They are sometimes donated to a food bank, for example.”

Wim Crouwel (1928-2019) died while the design for these stamps was still being developed. The co-founder of Total Design was also one of the Netherlands’ most famous stamp designers. “He’s one of my heroes,” says Van Praet. “Also for me as a stamp lover: as a collector, I’m not interested in certain subject matter and countries. I’m interested in the stamp designers who I admire. Of course, I own all of Crouwel’s stamps. In the design of Typically Dutch I also pay tribute to Crouwel as a graphic designer, who was nicknamed Mr. Gridnik due to his geometric and structuralist approach. There is a very strong grid behind these stamps.”

Edwin van Praet (1971) studied typography and graphic design at the Academy of Art and Design St. Joost in Breda. After graduating, he worked as a graphic designer at Tel Design in The Hague for seven years. In 2003, he joined Total Identity/Total Design, first as a Senior Designer and now as Creative Director. At this famous design agency in Amsterdam, he is responsible for developing client projects in terms of strategy, identity and brand experience. Van Praet has won many awards for his work in both national and international design competitions.

Total Design is not only a name – it also describes how the agency works. Total Design is an active name, which produces result-oriented, surprising and iconic solutions for every project. Total Design was founded in 1963 as a unique creative collective and works with both young talent and experienced individuals from various disciplines. Strategists work together with developers, branding experts and storytellers in an open playing field to collectively fulfil customers’ goals.

SALE/VALIDITY The stamps are available while stocks last at the post office counter in Bruna shops and at www.postnl.nl/bijzondere-postzegels. The stamps can also be ordered by phone from the Collect Club customer service on telephone number +31 (0)88 868 99 00. The validity period is indefinite.

VALUE The denomination on these stamps is ‘the Netherlands 1’, for standard letters weighing up to 20 grams sent to an address within the Netherlands.