ISSUE On 6 April 2020, PostNL will publish the Typically Dutch – tompouce stamp sheet. The issue is the fourth of the new Typically Dutch series, which follows the Beautiful Netherlands (2005-2019) series. The six identical postage stamps will be marked ‘Nederland 1’, the denomination for items up to 20g in weight destined for the Netherlands.

The Typically Dutch – tompouce issue was designed by graphic designer Edwin van Praet from Total Design in Amsterdam. The photographs were taken by Scrambled Media, also based in Amsterdam. In 2020 PostNL will be issuing five stamp sheets in total in the Typically Dutch series. Earlier stamps featured the smoked sausage (2 January), carrots (24 February) and hagelslag (23 March). The last stamp sheet, featuring bitterballen, will appear on 15 June this year.

SUBJECT This year, the Typically Dutch series focuses on foods and dishes that are typical for the Netherlands. This fourth issue focuses on the custard slice, aka the tompouce. The tompouce, also spelled tompoes, is a pastry shaped like a small brick. It consists of two layers of puff pastry with crème pâtissière and, occasionally, whipped cream in between the layers. The top is glazed, usually with pink icing (or orange on King’s Day). 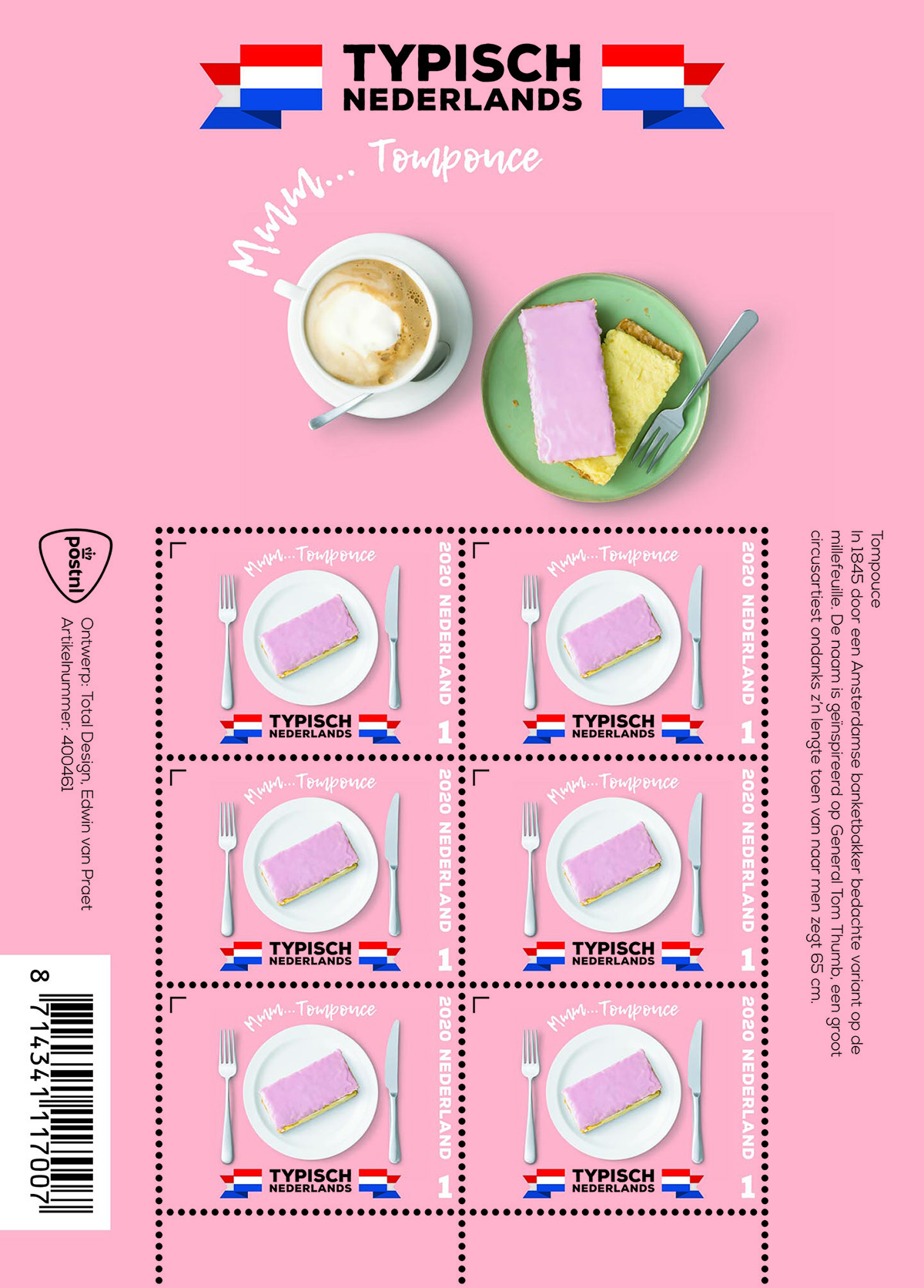 The name tompouce harks back to Tom Pouce, the French translation of Tom Thumb. Tom Thumb (who was eaten by a cow) appears in children’s stories as early as the 17th Century. The little man was no bigger than his father’s thumb. Once upon a time, the expression tompouce was used in Dutch to refer to all kinds of small things, such as a dwarf geranium or a lady’s umbrella.

There are various explanations for the name of this particular pastry. The first tompouce was supposed to have been created in 1845 by a patisserie in Amsterdam as a variation on the French millefeuille pastry. Legend has it that he named his pastry after an artist by the name of General Tom Thumb, who was allegedly only 66 cm tall. The big American circus with the little man performed in the Netherlands in the middle of the nineteenth century. The translation of Tom Thumb into tompouce was supposed to have something to do with the French name millefeuille. Another explanation is that the puff pastry of a tompouce is bound to fall apart when you eat it. And this is reminiscent of Tom Thumb who created a trail of crumbs so he could find his way home.

DESIGN The Typically Dutch – tompouce stamps feature a tompouce with pink icing, lying on a white plate with a knife and fork on either side. The tompouce has been photographed at an angle from the top, just showing a little filling. The logo for the Typically Dutch series is printed underneath the plate, including a folded Dutch banner on the left and right. The words Mmm… Tompouce are printed in a strong cursive font above the plate. The year (2020), country (Nederland) and denomination 1 are printed on the right-hand side of the stamp. The sorting hook is in the top left-hand corner. The background colour of the stamps is pink, just like the colour of the sheet edge. The tompouce is also featured on the top of the sheet edge, but now the top layer has been moved, so the yellow crème pâtissière is more visible. The tompouce is placed on a different plate, which is pastel green this time. On the left is a cup of cappuccino with properly whipped foam and a spoon on the saucer. The series logo, including the Dutch flag, returns above the image. The right-hand side of the sheet contains a short description of the tompouce and on the left there is space for the logo, name of the designer, item number and barcode.

TYPOGRAPHY The Nexa Thin and Nexa Rust (Svet Simov, Fontfabric, 2012) fonts have been used for the text on the stamps and stamp sheet. For the words Mmm… Tompouce, the Lemon Tuesday (Daria Kwon, Dafont, 2016) font was used.

DESIGNER The Typically Dutch – tompouce issue is the fourth in a new series that PostNL is publishing this year. The design was produced by graphic designer Edwin van Praet from Total Design. Typically Dutch follows the Beautiful Netherlands series, which PostNL published for 15 years.

In the new series, PostNL focuses on typically Dutch customs, products, dishes and customs. “In this first year, the focus is on authentic Dutch dishes and food,’ says Edwin van Praet. “After the stamps featuring smoked sausage, carrots and hagelslag this issue focuses on the tompouce. PostNL asked us to produce a design for Typically Dutch with potential for the future: a basic design that would be suitable for all of the subject matter. It had to be an accessible design that would appeal to everyone, does not hinder the design process and offers plenty of room for creativity – whether that’s with photos, illustrations or graphic solutions.’

The search resulted in long lists of potential subject matter, with different types of designs. Van Praet translated them into various designs that were then submitted to PostNL. In all of the designs, the dishes and food such as the tompouce on this fourth issue were given a prominent place on the stamps. The logo of the new series, with its red, white and blue banner, soon became a permanent feature. And so did the expression Mmm… Tompouce, with a handwritten font just like one you find on a chalkboard in the kitchen.

PostNL unanimously selected the design based on nostalgic photography. During the development process for this concept, Van Praet initially used stock images. However, this did not work so well because the photographs differed from each other too much in terms of quality and style. Instead, Total Design called on the specialist food photographers and stylists at the Amsterdam-based agency Scrambled Media. Van Praet: “The tompouce is incredibly popular, I could definitely tell during the photography session. I think they’re delicious too, even though I am not usually a cake person. What I also love is that there are all kinds of theories on how to eat a tompouce. With a fork? A spoon? Cut in half? Or just pick it up? Me, I first eat the cream, then the puff pastry. During the photo session we tried different tompouces from different bakeries. Including one from the HEMA, of course. Ultimately we picked the tompouce with the loveliest shine. On the stamp, the tompouce is pristine and untouched, with a fork lying next to it. We angled the camera slightly, so a small part of the filling is visible, otherwise you can’t tell what you are looking at.”

The plate used has a neutral appearance, it is an off-white colour and is not too deep. “The tompouce really comes into its own,” says Van Praet. “The same goes for the knife and fork. Not that modern Scandinavian cutlery is all that trendy these days, but the knife and fork have a traditional, inconspicuous design. We have managed to sneak some in. Forks are usually slightly smaller than knives, but that wouldn’t have worked in terms of composition. The grid of the image on the stamp consists of a circle within two squares. In order to achieve perfect squares, we made sure that the knife and fork looked like they were the same length. The grid fits inside the rectangular shape of the stamp, which you could see as a placemat. The smallest placemat in the Netherlands.”

The pink colour of both the stamps and the edge of the sheet is based on the pink top of the tompouce. On the stamp, the tompouce is pristine and untouched. The pastry is not parallel to the stamp edge, but slanted slightly upwards to make the design a little more dynamic. Van Praet allowed himself much more freedom on the edge of the sheet, he explains. “The top layer of puff pastry has been moved aside, the way I always do it when I eat one. The tompouce is turned up a little further than on the stamp and the fork is also placed at a different angle. We photographed the cappuccino separately. It was essential that we were fast, because the bubbles would disappear otherwise. We did consider adding a nice pattern to the milk foam, the way baristas do this so nicely. But we didn’t think that was typically Dutch. It’s all photographed as is – no tricks were used to make it look nicer. That’s also one of the great things about working with Scrambled Media. All of the dishes and food they photograph are eaten after the shoot. They are sometimes donated to a food bank, for example.’