ISSUE The cooperating postal companies in Europe have been issuing stamps with a common theme for over 60 years. Since 2002, a design competition has also been associated with this: the EUROPA Stamp Best Design Competition. The competition is organised by PostEurop, the organisation in which all of the European national postal companies collaborate. For 2020, the design competition will focus on old postal routes. That is why, on 11 May 2020, PostNL will publish the postage stamp sheet Old postal routes, with 6 stamps bearing the denomination 1 for post of up to 20 grams for delivery to international destinations. The stamps will feature a postillion on horseback, a resting horse and a stagecoach. Until the advent of the railways, this was the way mail was transported throughout Europe for centuries.

SUBJECT For hundreds of years, there was one family that had a de facto monopoly on European mail delivery. It all started in 1489, when Maximilian I of Austria ordered the Lombardian courier family Tasso to set up a postal network. This also included routes to and from the Low Countries. Under Philip the Handsome and Charles V – Maximilian’s son and grandson – the network continued to expand across the Habsburg Empire. The mail was taken from A to B as fast as possible, first on horseback and then by coach. Although stagecoaches were not as fast as horses, they were able to carry a lot more post. On top of that, paying passengers provided additional earnings. Von Thurn und Taxis – because that was the name the Tasso family acquired in the 17th century – used a relay system to deliver the mail as quickly and efficiently as possible. Along the routes there were plenty of stage stations where postillions could rest, get a fresh horse and drop off mail or pick it up. Their motto was cito, cito, cito, citissimo – fast, fast, fast, superfast. It was all about getting news to the farthest corners of Europe in as little time as possible. This way, the Von Thurn und Taxis family business dominated the European postal services from the 16th to the 19th century. 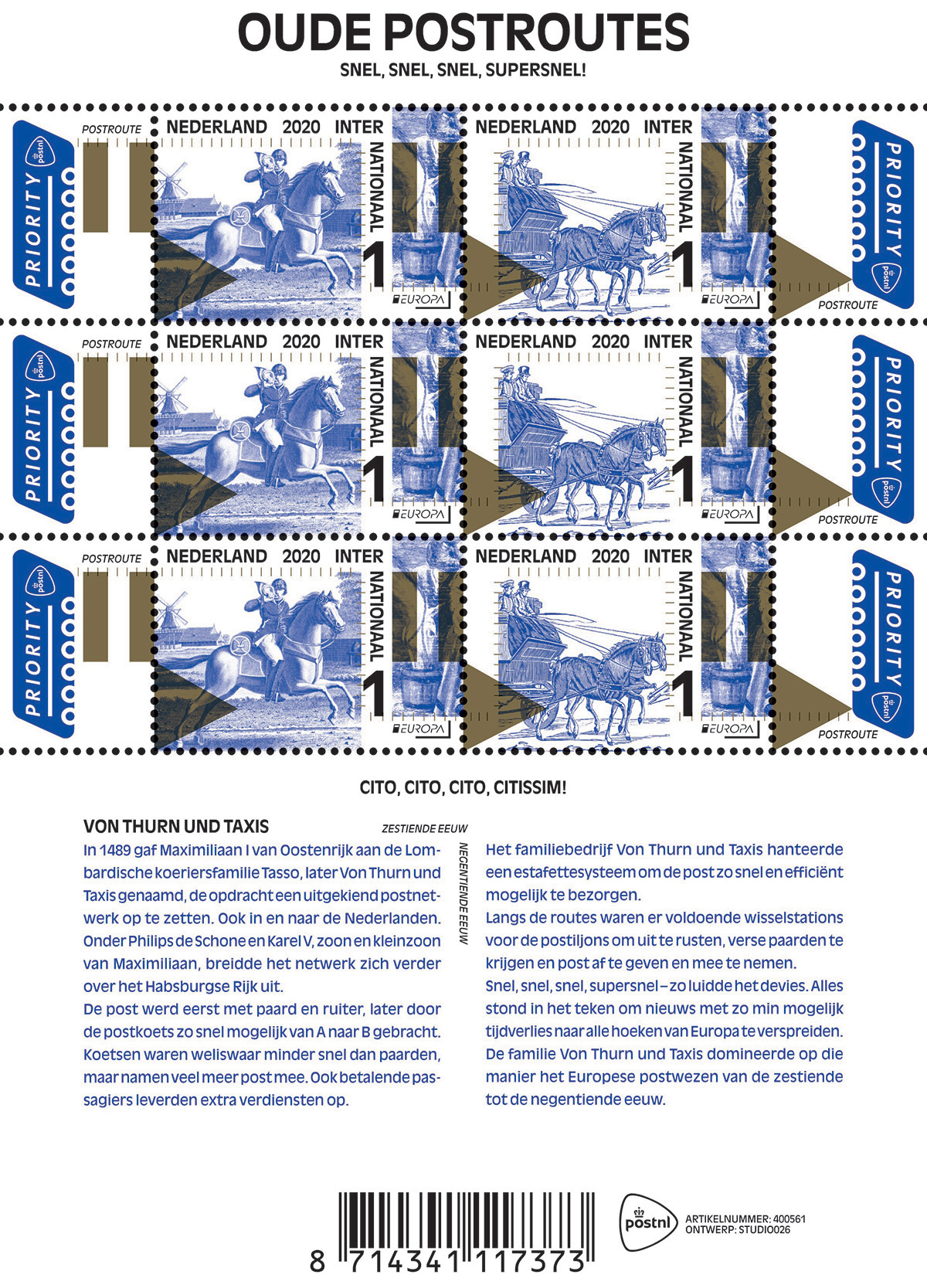 DESIGN The stamp sheet Old postal routes features 6 postage stamps in 2 designs. The first design features an etch of a postillion on horseback with a post horn at his mouth. The second design features a print of two postillions on the box of a stagecoach pulled by two horses. On the right-hand side of each stamp there are identical vertical cut-outs of a painting of a resting horse with its head in a feeding trough. All images have been printed in the same blue as the Priority logo.

A separate layer in gold features two symbols that refer to action and rest in the relay system on the old postal routes. The symbols comprise an equilateral triangle pointing to the right to refer to action and two narrow parallel bars to refer to rest. The typography of the stamp is printed in white above the large image with the horse/stagecoach and then down along the narrow image with the resting horse. The PostEurop logo is printed below the horse. A line of golden dashes indicating the route has been drawn between the images and the typography. The line runs from the left tab across the two stamps to the right tab. The dashes symbolise the stops on the postal routes that the postillions used to run.

On the edge of the sheet is the title of the stamp sheet, with below it the motto of the Von Thurn und Taxis family in Dutch: snel, snel, supersnel. The original motto, in Latin, (cito, cito, cito, citissimo) is printed below, above the text explaining how the Von Thurn und Taxis family dominated mail delivery in Europe from the 16th to the 19th century.

TYPOGRAPHY All texts on the stamps and the sheet edge are printed in the Antique Olive font (Roger Excoffon, 1962-1966, Fonderie Olive/URW Type Foundry).

DESIGNERS The Old postal routes stamp sheet was designed by Anne Schaufeli and Huub de Lang of studio026 in Arnhem. According to Schaufeli, the challenge was turning an old-fashioned subject into a stamp with a more contemporary feel. “It is a historic theme, but we wanted to design a stamp fit for 2020. We got turned onto the Von Thurn und Taxis family, which dominated the European postal routes from the 16th to the 19th century. So we had a really close look at the history of the family. After all, before you start sketching it’s essential to get a good grasp of the material. It is a complicated story that we wanted to tell using a clear design to really bring across that feeling of history. Who was this family? How was the post delivered in the old days? Which routes were there? Who was in power? Which wars affected the development of the postal routes? All those questions take you right to the heart of the story. For a graphic design you really need to find the essence, so you can work around a strong concept.” 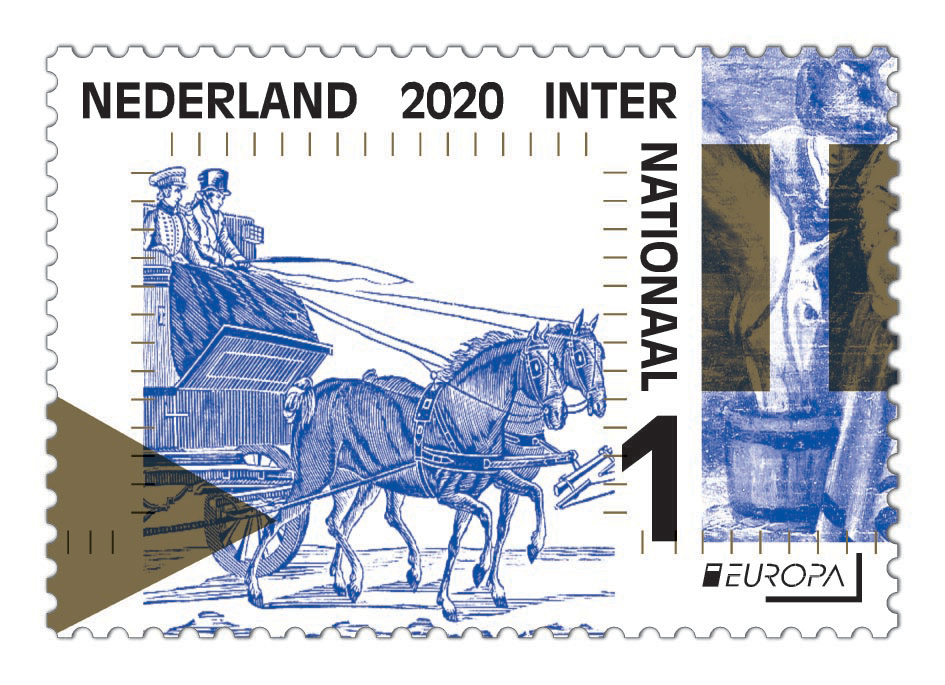 The motto of the Von Thurn und Taxis couriers was cito, cito, cito, citissimo! Ergo: fast, fast, fast, superfast. “And that motto is what the concept is based on,” explains Schaufeli. “That’s why it’s featured on the sheet so prominently. The postillions had to take the mail from A to B as fast as possible. We wanted to know how they achieved this – first on horseback then using the stagecoach – and we also wanted to graphically represent the relay system. The system’s essence is all about alternating action with rest. The action is expressed on the stamps by the movement of the postillion on horseback and the stagecoach. The rest is expressed by the eating horse. The gold symbols also reflect action and rest. The two stamps move from left to right, from A to B. They are connected by a line with golden dashes and by the typography that runs around the images like a route. The movement aspect has been incorporated on two levels. There is movement in the space from A to B and there is movement in time because the post was first transported by a rider on horseback and then by stagecoach.”

The design of the Old postal routes stamps is built up out of three layers: the layer with the three blue images, the layer with the gold symbols and the layer in which the typography has been combined with the dashed lines that symbolise the postal routes. Schaufeli: “We started looking for images while we were developing the concept. That took a fair amount of time. We found an awful lot of stuff, but we did have particular requirements. We wanted images from the heydays of the Von Thurn und Taxis family, we wanted images from the Netherlands, and their perspective and style had to combine well together. AND they had to fit in with our concept and express speed, action and rest. Ultimately we found the three chosen images in the image bank of the Rijksmuseum. We did have to make some minor adjustments to get everything to fit together. The original print of the stagecoach had four horses, but the stamp doesn’t have the space for those. So four horses became two.”

Based on the principles of the concept – speed and the relay system – the gold layer was also designed to emphasise the stamp’s contemporary character. “We created numerous sketches for that,” says Schaufeli. “There are so many ways in which you can represent this. At one point we arrived at the symbols for action and rest as part of a graphic translation. We presented a few alternatives, but we all agreed that this was the best design. We did need to shift things around a few times to get the right balance between the gold and the blue layer. The dimensions also help the blue and gold layer fit well together. The rest symbol is just as wide as the resting horse, for instance.”

A feeling of being on the road

The postal routes were the third element of the concept. “We’d worked out the routes for ourselves as part of our investigation. We decided not to go for topographical accuracy on the stamps, because not every source was equally clear and the routes changed over time. That is why we decided to create a feeling of ‘being on the road.’ The gold line meanders around the images like a postal route while the dashes symbolise the stops where postillions could rest. And the typography follows the route. The Antique Olive font is a contemporary and clean letter, but it has enough character to go with the theme of old postal routes. It has plenty of movement and personality. It is a nice, solid font. And that was definitely necessary, because the design is so layered.”

The creation of the design of the Old postal routes was an intensive process for Anne Schaufeli and Huub de Lang. “It was a tough assignment that we really had to get our teeth into,” says Schaufeli. “And then we finally had that wonderful moment when, halleluiah, you finally realise that you’ve managed to capture the essence. Huub and I always work on products like these together. First we sketch together, then we work out what we discussed separately in our own sketches. Then we put everything together again, scratch half of it, put it together again, and continue until we get where we want to be. Of course, it was a huge honour to be allowed to create another stamp using our own methods. Because to us, the concept is what guides us. That’s what we start with, the sketches come after. But it also has to look good once it’s executed, of course, with the right balance between the components. We believe everything must be exactly right. On all fronts, on every square millimetre, in every minute detail.”

studio026 is a graphic design agency from Arnhem, consisting of Anne Schaufeli and Huub de Lang. Both studied at ArtEZ University of the Arts in Arnhem from 2004 to 2008. Since 2009, the agency has focused on designs that are conceptually, editorially and aesthetically sound. The agency’s graphic designers believe in conceptual thinking and take plenty of time and space for research, experiments and innovation. studio026 designs unique books, posters, magazines, catalogues, identities, infographics and all kinds of graphic expressions. In 2017, Anne Schaufeli and Huub de Lang designed the stamp 150 years of the Red Cross in the Netherlands for PostNL.

SALE/VALIDITY The stamps are available while stocks last in Bruna shops and at www.postnl.nl/bijzondere-postzegels [in Dutch]. The stamps can also be ordered by phone from the Collect Club customer service on telephone number +31 (0)88 868 99 00. The validity period is indefinite.

VALUE The stamps are marked ‘Internationaal 1′, the denomination for items up to 20g in weight destined for delivery outside of the Netherlands.