ISSUE On 2 January 2020, PostNL will publish the Experience nature – birds of prey and owls issue: a sheet of ten stamps in ten different designs. These postage stamps will be marked ‘Nederland 1’, the denomination for items up to 20g in weight destined for the Netherlands. The stamp sheet is part of the Experience nature series, with the first published in 2018 and the second in 2019. For the third series, in 2020 PostNL will once again issue four stamp sheets containing forty stamps in total. The stamps contain species of birds that are having a particularly difficult time. Most of them are on the Dutch Red List of breeding birds in the Netherlands or on the Dutch Red List of migratory birds/winter visitors in the Netherlands. All of the photos on the stamps originate from Buiten-Beeld, the Dutch nature photography image bank.

Experience nature – birds of prey and owls is the first stamp sheet from the third series. Later in the year, there will be stamps featuring farmland birds (24 February), coastal birds (15 June) and forest and heathland birds (14 September). An individual Experience nature stamp sheet costs €9.10. The price for the full 2020 series is €36.40, including the storage folder. 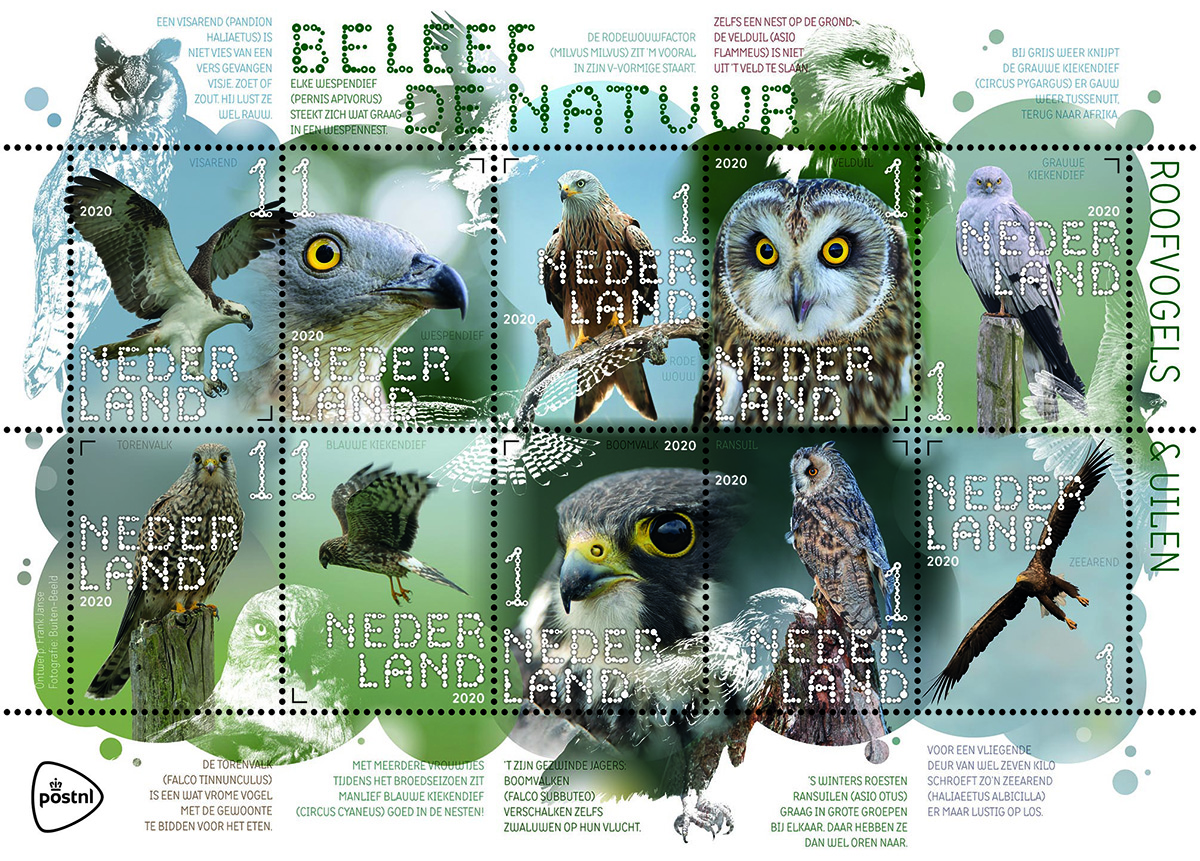 SUBJECT Birds of prey are carnivores that hunt for prey or live off cadavers. They can be recognised by their large curved beak and claws with sharp nails, three toes at the front and one toe at the back. Owls are predominantly nocturnal birds of prey and generally live on small mammals such as mice and small birds. The eagle owl is the largest owl and catches the largest prey, from birds up to the size of buzzards to mammals up to the size of foxes. Our smallest owl, called the little owl, also catches earthworms and May bugs. Within the birds of prey there are two orders: the Accipitriformes and the Falconiformes. The last order includes all types of falcons. Within the Accipitriformes order, ospreys form a separate family (Pandionidae). Taxonomically, owls belong to the Strigiformes order. Within this order, barn owls belong to a separate family (Tytonidae) from the other owls (Strigidae). Owls have a ‘reversible toe’, meaning that they hold their prey with either two toes forward and two backwards, or with three toes forward and one backwards. This is the case for the osprey.

The stamps depict (from left to right) the following birds: osprey, honey buzzard, red kite, short-eared owl, Montagu’s harrier, common kestrel, hen harrier, hobby, long-eared owl and white-tailed eagle. Transparent images of seven of the ten birds have been incorporated into a separate graphic layer on the stamp sheet: the long-eared owl, osprey, red kite, hobby, hen harrier, common kestrel and white-tailed eagle. Most of the birds on the stamps are on the Dutch Red List of breeding birds or migratory birds/winter visitors in the Netherlands. The Dutch Red List of breeding birds includes 87 bird species, or 44 percent of all species that breed in the Netherlands. The number of bird species in the danger zone increased by nine compared to the previous list from 2004. Ten species are seriously endangered, such as the short-eared owl and the little bittern.

DESIGN The Experience nature – birds of prey and owls stamp sheet was designed by graphic designer Frank Janse from Gouda. On the sheet, the ten birds were each given their own stamp and depicted in their natural environment. In some cases, the image or the background colour continues onto the adjacent stamp and onto the sheet edge.

The photos are captured in a graphic layer of overlapping circles of different sizes, which break through the boundaries of the perforations. The circle pattern returns as small droplets on the sheet edge and the tabs. There is a second graphic layer on top of the circles. It consists of transparent images of birds of prey and owls. The images are almost abstract due to their monochrome shades.

TYPOGRAPHY For the typography, Janse used his own font, which he designed especially for the Experience nature series. The font, which consists of tiny circles, was given the name Fdot. The explanatory text on the sheet edge are set in the TT Milks Light and Demibold in capitals (2017, Ivan Gladkikh for Typetype). In the text, the designer creatively and humorously expresses his associations with the names, features and appearance of the depicted birds.

DESIGNER The design of the Experience nature – birds of prey and owls stamp sheet was the work of graphic designer Frank Janse from Gouda. He built on the concept he developed for the Experience nature series from 2018 and 2019. His design focuses on the associative, sensory and sometimes mysterious experience of nature.

The new Experience nature series is entirely dedicated to birds of the Netherlands. The starting point in selecting the birds for the four stamp sheets was vulnerable and endangered bird species. “This gave the issue a new, substantive depth,” says Janse. “PostNL also supports the efforts of Vogelbescherming Nederland to protect all wild birds and their habitats as much as possible.

The subject of Experience nature is closely related to what nature lover Janse values in life. “For as long as I can remember, I have had a huge interest in nature. What goes on out there is absolutely fascinating. It’s a world in itself, with many layers. In the ground, on the earth, in the water and in the air, as with these birds of prey and owls. I’m fascinated by the elusiveness of nature.”

As a child, Janse carried an ANWB bird guide around with him. “The booklet contained pictures of birds, outlines and a description of the bird’s call. Then you had to try and spot the birds. That wasn’t as easy as it sounds in Zeeland, where I grew up. The soil was still saline because large areas of land were flooded between 1944 and 1945. As a result, there were few birds flying around.”

Birds of prey are especially appeal to bird lovers for their power and speed. “They are the strongest birds around. That makes it even more unpleasant that they are so seriously endangered,” says Janse. “Owls mainly appeal to the imagination because they hunt at night. They’re mysterious and captivating. You can’t hear them, but they are here. They can even fly silently – which is essential for them because their prey recognises danger by ear.”

When it came to selecting the birds of prey and owls for the stamps, the most endangered and vulnerable species were selected in consultation with Vogelbescherming Nederland. “For the visual material, we once again used the enormous image bank at Buiten-Beeld,” says Janse. “Out of the selected birds, relatively few can be seen flying around in the Netherlands. And yet there was plenty of photographic material to choose from. One of the most important criteria in selecting the images was creating variety in the position in which the birds were photographed. Sitting, circling, grabbing, praying, with close-ups and images from afar. I also looked for photographs in which the birds are depicted as being as tangible as possible. This wasn’t always easy an easy task – the bird shape with elongated wings and protruding claws is not easy to fit onto a stamp. Birds also look very different when they’re in flight to when they’re on the ground.”

When it came to the design, the hobby was the first to be placed on the stamps. “This bird has always captured my imagination – partly due to its awesome speed and its ability to turn in the blink of an eye. This enables the hobby to catch fast prey when in flight – even swallows. The hobby can also pluck large dragonflies from the air. This hunting method differs from that of the common kestrel, which dives for prey on the ground. The hobby is a particularly beautiful, impressive bird, and in the past it was used in falconry. Its large eyes appear to look right through you. And that’s something that is a characteristic of birds of prey: their piercing gaze alongside their crooked beak and sharp claws. I placed the hobby in the middle of the bottom row. That way, it looks like it’s carrying the whole design. Those eyes – they’re the first thing you look at.”

Balance on the sheet

By selecting lots of different positions, the birds on the stamp sheet are not depicted in proportion. “That’s right,” says Janse. “The hobby, for example, is one of the smaller birds of prey, but here it is depicted as the largest. This is the opposite for the white-tailed eagle, who has a wingspan of almost 2.5m. I don’t mind that. In addition to variety, I focused on distributing the images in a way that was balanced. For example, the osprey in the top left-hand corner mirrors the white-tailed eagle in the bottom right-hand corner, and the piercing eyes of the honey buzzard and the short-eared owl are visible to the left and right above the hobby. The photographs of the common kestrel and the Montagu’s harrier in their typical position are also balanced. It’s a matter of endlessly moving lots and lots of photographs around.”

Janse main tool for connecting the stamps was colour. The transparent images of the birds of prey also fulfil this role. “I might have spent most of my time on that. I didn’t want to manipulate the original colours of the photographs in order to make the backgrounds blend into each other – that was out of respect for both the photographer and for nature. Since the stamps are being published in winter, the photographs contain a lot of greyish colours and dark shades. Chillier, colder colours are also more suitable for birds of prey. Another advantage is that the eyes stand out even more.”

Frank Janse (1967) graduated as a graphic designer from the Willem de Kooning Academy in Rotterdam in 2001. Until 2019, he worked for various advertising and design agencies, including Room for ID’s, and he also worked for himself as Frank Grafisch Ontwerp in Gouda. At the beginning of 2019, together with Leene Communicatie, he founded the new company Leene Visuele Communicatie, which designs communication tools focusing on content and information design. Frank Janse is a specialist in corporate identity, branding, infographics and communication campaigns. Leene Visuele Communicatie works for various educational institutions and both profit and non-profit clients. Their customers include PostNL, real estate specialist Fortierra, the Municipality of Rotterdam, Nuon/Vattenfall, Lagerwey Wind and the Dutch central government. On the instructions of PostNL, Frank Janse has previously designed various luxury storage systems and personal stamps, including the 2017 themed collection on bird species of the Netherlands. He also produced the designs for the first two Experience nature series in 2018 and 2019.

SALE/VALIDITY The stamps are available while stocks last at all PostNL sales outlets, the post office counter in Bruna shops and at www.postnl.nl/bijzondere-postzegels [in Dutch]. The stamps can also be ordered by phone from the Collect Club customer service on telephone number +31 (0)88 868 99 00. The validity period is indefinite.