Today I present to you 2 original letters that I am very pleased to put in my collection! The 1st one below was sent to me by Velu, a blogger friend from India, who travels the world on board his merchant ship, the MT Maroni, registered in Willemstad, Netherlands Antilles. The words “Paquebot-Mail, Posted on High Seas” means that this letter was posted on board a ship which had no official post office. In international waters, mails have to be franked with stamps issued by the vessel’s flag. These mails are then delivered to any post office located in a port without tariff surcharge.

The 1st Paquebot mails appeared in 1894 following a directive of the UPU (Universal Postal Union) which then chose the French term “Paquebot”, French being still today the official language of this world organization. On this letter, Velu logically used stamps issued by the Netherlands Antilles, while his ship was in the territorial waters of Senegal in Dakar. These 2 stamps, therefore, should receive a cancellation from a Senegalese Post Office…this was unfortunately not the case 🙁

The orange 30c stamp, issued in 1983, is part of a long definitive set representing some typical buildings from the 6 islands making up the Netherlands Antilles federation (Aruba, Bonaire, Curacao, Saba, St. Eustatius and St. Martin). Aruba later became a separate country in 1986 within the Netherlands and therefore issued its own stamps. The other stamp represents a dragonfly (Odonata) and was issued in 2002 as part of a nice set of 5 values about the fauna of the 5 islands of the federation.

Finally, some quite mysterious mentions appear on the left on the cover…I try to help you :

The 2nd letter above is a little bit different. Thank you very much Stéphane 🙂 The €0.54 stamp was issued on January 16, 2008 by the French Territorial Collectivity of Saint-Pierre and Miquelon, located off the coast of Newfoundland in Canada. The “1st Day” was logically held in Saint-Pierre, but also in Ouistreham, in Normandy (France)! The stamp pays tribute to Rene Autin, a native of the archipelago, a member soldier of the Kieffer commando who participated to the Normandy Landings on June 6, 1944 at Sword Beach, near Ouistreham. He is pictured on the stamp in uniform with a cross of Lorraine in the background, the symbol of “France libre”. 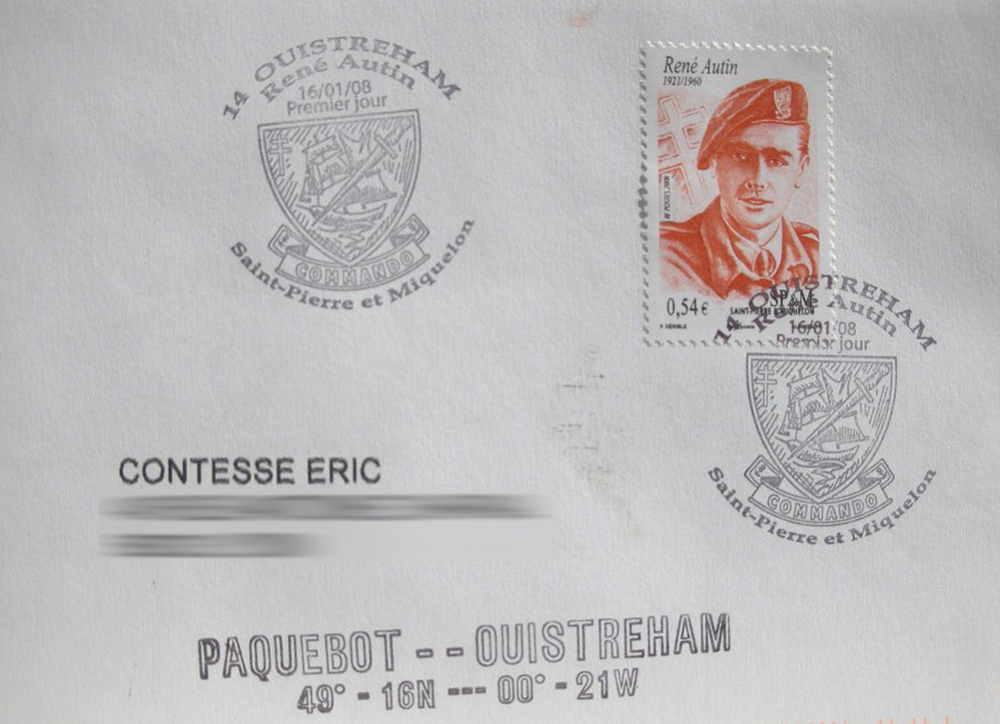 The “1st Day” cancellation represents the insignia of the Kieffer battalion. The “Paquebot-Ouistreham” postal mark from the port Post office (with its coordinates) enables sending mail from France while the stamp has not been issued by France…I’m not sure that this is really legal and that it respects the UPU postal directives? I also don’t know if this “1st Day” issue of a overseas stamp in France took place for the first time or not??

One thought on “My first Paquebot Mails”