ISSUE On 23 March 2020, PostNL will publish the Typically Dutch – hagelslag stamp sheet. The issue is the third in the new Typically Dutch series and follows the Beautiful Netherlands (2005-2019) series. The six identical postage stamps will be marked ‘Nederland 1’, the denomination for items up to 20g in weight destined for the Netherlands.

The Typically Dutch – hagelslag issue was designed by graphic designer Edwin van Praet from Total Design in Amsterdam. The photographs were taken by Scrambled Media, also based in Amsterdam. In 2020 PostNL will be issuing five stamp sheets in total in the Typically Dutch series. Earlier stamps featured the smoked sausage (2 January) and carrots (24 February), later ones will feature the tompouce (custard slice) (6 April) and bitterballen (15 June).

SUBJECT This year, the Typically Dutch series focuses on foods and dishes that are typical for the Netherlands. This third issue focuses on hagelslag. On Saturday 19 April 1913, the Provinciale Drentsche en Asser Courant published an advertisement for Jong’s Hagelslag-Chocolade. Cost: 1.80 guilders for a 1 kilo tin. As far as we know, the commendation of this new “Sandwich Chocolate” is the oldest reference for the mention of hagelslag as a sandwich filling. Hagelslag (chocolate sprinkles) is only available in the Netherlands, Indonesia, Surinam and Belgium. Shops in other countries do offer similar products, but they are meant to be used to decorate cakes. There are various variations available: vruchtenhagel (fruit), anijshagel (aniseed) and, of course, the most important one, chocolate hagelslag. According to the Warenwetbesluit Cacao en Chocolade (Commodities Act Decree on Cocoa and Chocolate), chocolate hagelslag must contain at least 32 percent cocoa. 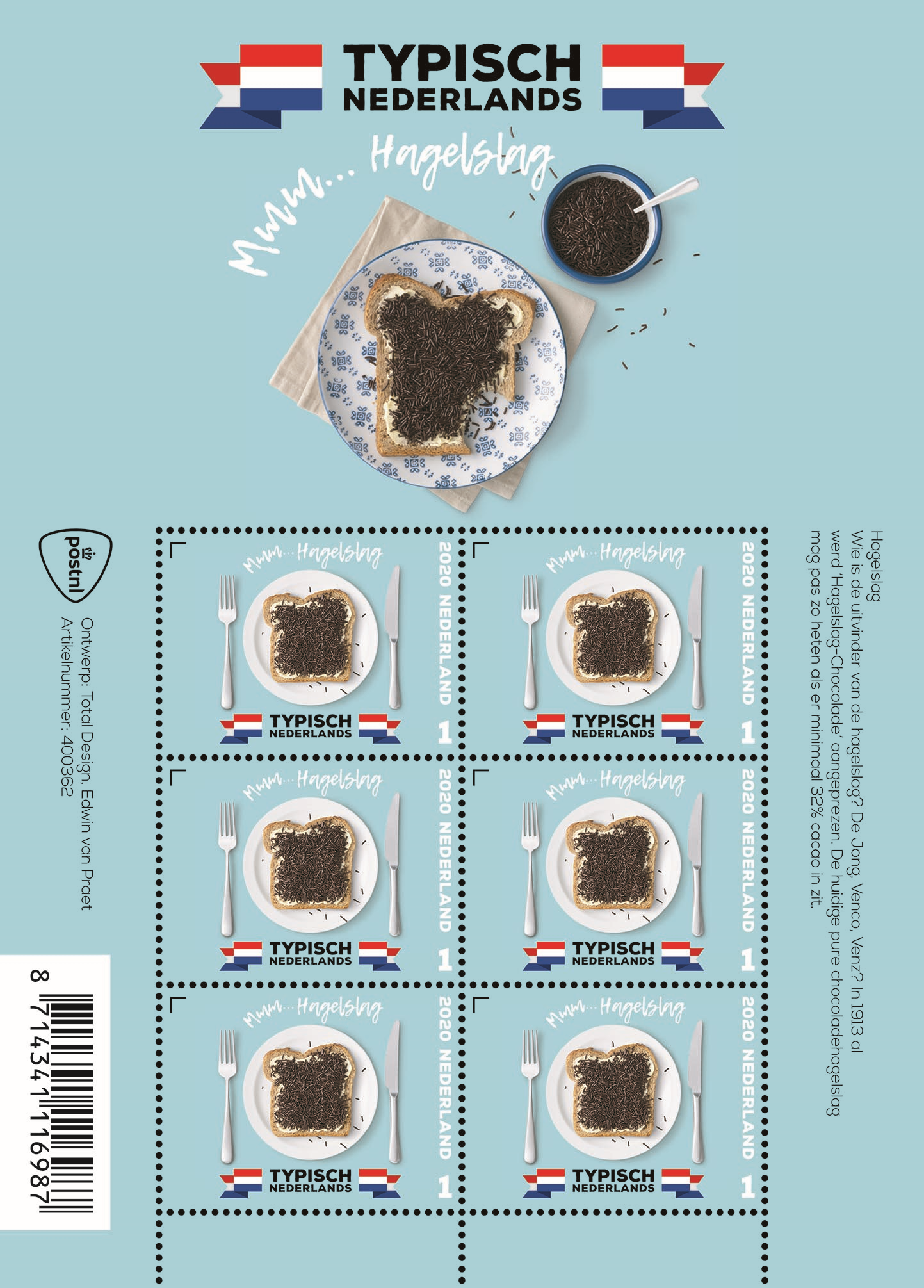 Well-known top brands that make hagelslag are Venz and De Ruijter. The history of Venz began in 1890 when Hendrik de Vries started a wholesale business in chocolate and confectionery in Amsterdam. Some time later, the company was named Venz, which is an abbreviation of de Vries en Zonen. Venz has been producing hagelslag since 1936, first in its factory in Vaassen, later in Utrecht. De Ruijter’s history goes even further back, because Cornelis de Ruijter opened a patisserie in Baarn in 1860. That is where he made his name with his (crispbake with) muisjes (sugar-coated aniseed) and later with his gestampte muisjes (crushed muisjes) as sandwich filling. De Ruijter has been producing chocolate hagelslag since 1957 after it took over the factory of Erven de Jong – the same company that placed the advertisement in 1913. Both Venz and De Ruijter are now part of the US food corporation Kraft Heinz. Venz calls its sandwich filling chocoladehagelslag, while De Ruijter calls its product chocoladehagel, because the name “hagelslag” is actually a registered trademark.

DESIGN The Typically Dutch – hagelslag stamps feature a slice of brown bread topped with butter and hagelslag, lying on a white plate with a knife and fork on either side. There are also some loose sprinkles on the plate. The logo for the Typically Dutch series is printed underneath the plate, including a folded Dutch banner on the left and right. The words Mmm… Hagelslag are printed in a strong cursive font above the plate. The year (2020), country (Nederland) and denomination 1 are printed on the right-hand side of the stamp. The sorting hook is in the top left-hand corner. The background colour of the stamps is pastel blue, just like the colour of the sheet edge. The slice of bread with hagelslag is also featured on the top of the sheet edge, but now with a big bite taken out of it. The slice of bread has been put on a different plate with a blue pattern. On the right is a bowl with a blue rim filled with hagelslag and a silver spoon. Underneath the plate with the slice of bread is a napkin that has been folded double. On this picture, the sprinkles have also landed next to the plate. The series logo, including the Dutch flag, returns above the image. The right-hand side of the sheet contains a short description of the hagelslag and on the left there is space for the logo, name of the designer, item number and barcode.

TYPOGRAPHY The Nexa Thin and Nexa Rust (Svet Simov, Fontfabric, 2012) fonts have been used for the text on the stamps and stamp sheet. For the words Mmm… Hagelslag, the Lemon Tuesday (Daria Kwon, Dafont, 2016) font was used.

DESIGNER The Typically Dutch – hagelslag issue is the third in a new series that PostNL is publishing this year. The design was produced by graphic designer Edwin van Praet from Total Design. Typically Dutch follows the Beautiful Netherlands series, which PostNL published for 15 years.

In the new series, PostNL focuses on typically Dutch customs, products, dishes and customs. ‘In this first year, the focus is on authentic Dutch dishes and food,’ says Edwin van Praet. “After the stamps featuring smoked sausage and carrots, this issue focuses on hagelslag. PostNL asked us to produce a design for Typically Dutch with potential for the future: a basic design that would be suitable for all of the subject matter. It had to be an accessible design that would appeal to everyone, does not hinder the design process and offers plenty of room for creativity – whether that’s with photos, illustrations or graphic solutions.’

The search resulted in long lists of potential subject matter, with different types of designs. Van Praet translated them into various designs that were then submitted to PostNL. In all of the designs, the dishes and food such as the hagelslag on this third issue were given a prominent place on the stamps. The logo of the new series, with its red, white and blue banner, soon became a permanent feature. And so did the expression Mmm… Hagelslag, with a handwritten font just like one you find on a chalkboard in the kitchen.

PostNL unanimously selected the design based on nostalgic photography. In the development process for this concept, Van Praet first of all used stock images. However, this did not work so well because the photographs differed from each other too much in terms of quality and style. Instead, Total Design called on the specialist food photographers and stylists at the Amsterdam-based agency Scrambled Media. Van Praet: “Everyone was incredibly enthusiastic during the photography session. After all, who didn’t grow up with hagelslag in the Netherlands? Me, definitely – it’s delicious with butter on a slice of bread. As a child, you first realise how Dutch hagelslag actually is when you go abroad for the first time. There are different kinds of chocolate hagelslag, but dark is the best, of course. And it looks really strong in the picture. Just like the bread, with its cut right down the middle, which is the most photogenic bread you can get. But because the plates that were used were not actually breakfast plates, this slice of bread was actually put together from six slices.”

The plate used has a neutral appearance, it is an off-white colour and is not too deep. “The hagelslag really comes into its own,” says Van Praet. “The same goes for the knife and fork. Not that modern Scandinavian cutlery is all that trendy these days, but the knife and fork have a traditional, inconspicuous design. We have managed to sneak some in. Forks are usually slightly smaller than knives, but that wouldn’t have worked in terms of composition. The grid of the image on the stamp consists of a circle within two squares. In order to achieve perfect squares, we made sure that the knife and fork looked like they were the same length. The grid fits inside the rectangular shape of the stamp, which you could see as a placemat. The smallest placemat in the Netherlands.”

The pastel blue colour of both the stamps and the edge of the sheet is based on the blue of the plate and – surprisingly – a glass of milk. Because designer Van Praet associates a hagelslag sandwich with milk, and he associates milk with the colour blue. On the stamp, the slice of bread with hagelslag is neatly positioned in the middle of the plate. Van Praet allowed himself much more freedom on the edge of the sheet, he explains. “Because there you have the same sandwich, but with a big bite out of it. And the cutlery is missing too. Because, really, who eats a slice of bread with hagelslag with a knife and fork? I certainly don’t. Here, too, the sprinkles ended up next to the plate. They were deposited one by one with tweezers during the photo session. It’s all photographed as is – no tricks were used to make it look nicer. That’s also one of the great things about working with Scrambled Media. All of the dishes and food they photograph are eaten after the shoot. They are sometimes donated to a food bank, for example.’