Thank you to my brother Stéphane for allowing me, through his nice postcard below, to evoke the recent institutional and postal reform that occurred in this region of the Netherlands Antilles! This card was mailed on November 3, 2010 from the village of Winwardside, one of the four major municipalities of the small island of Saba (nicknamed “The unspoiled queen”) located in the northern Lesser Antilles.

The three islands of Saba, Bonaire and St. Eustatius, which formed the federation of the Netherlands Antilles with Sint-Maarten and Curacao since 1954, have changed status in 2010 to become three special municipalities within the Kingdom of the Netherlands. These three islands are thus forming, since October 10, 2010 (the famous date of 10/10/10, sought-after by many philatelists…), the Caribbean Netherlands (“Caribisch Nederland” in Dutch) also known as the BES islands after the dissolution of Netherlands Antilles. 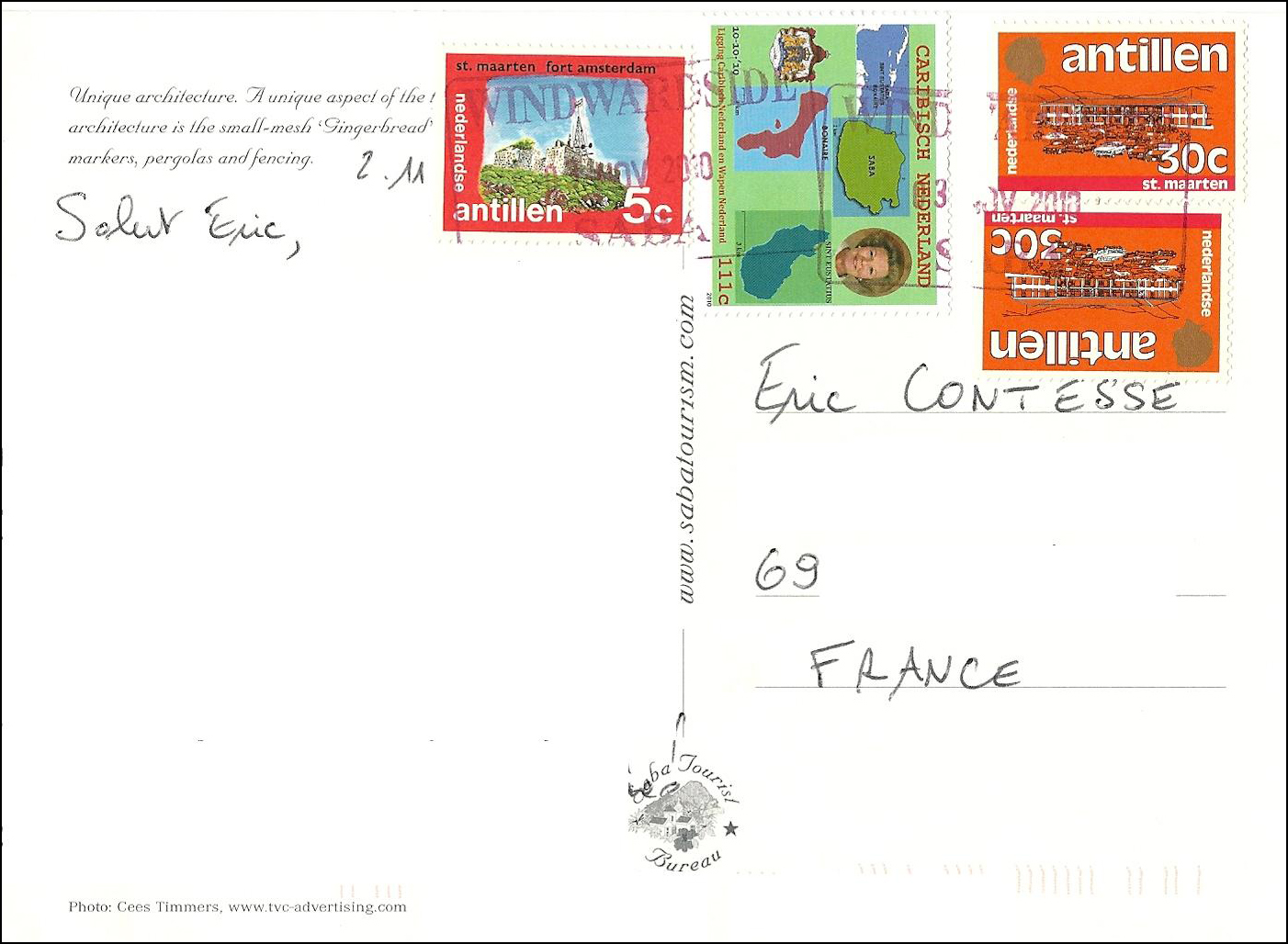 The stamp at 111c above is thus the first stamp, issued in 2010, by the Caribbean Netherlands. It features the maps of the three islands of Saba, Bonaire and St. Eustatius and their location in the Caribbean, the Arms of the Netherlands and the portrait of Queen Beatrix. I like this mixed postage with the other two definitive stamps issued in 1972 (5c) and 1983 (30c) by the Netherlands Antilles. The 5c stamp depicts the Fort Amsterdam, the largest fortification on the island of Sint Maarten, built in 1631 by the Dutch, making it the first Dutch fort in the Caribbean.

The other stamp is part of a series devoted to typical architectural buildings of the Netherlands Antilles, an example also located in Sint Maarten here. This new stamp of the Caribbean Netherlands was issued in sheet of 20 stamps including a central strip of five coupons. Sint Maarten and Curaçao have also changed their status to become (like Aruba earlier) two constituent countries within the Kingdom of the Netherlands. 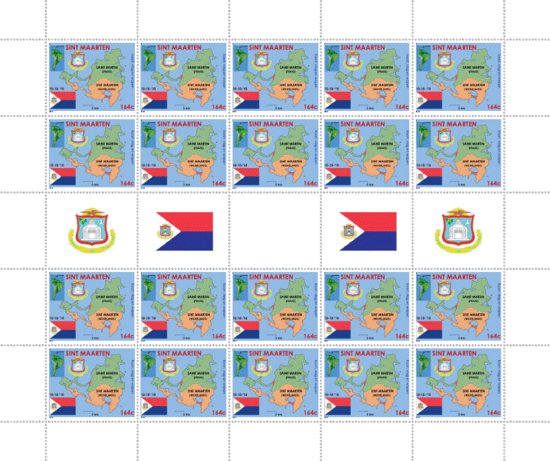 Since October 10, 2010, Sint Maarten and Curaçao also issue their own stamps depicting a map of the island and their respective flags and coats of arms. Here is above this first stamp issued by Sint Maarten, also in sheets of 20 stamps with central band. I don’t know precisely how long these former “Netherlands Antilles” stamps will have to be used on mail ?

To conclude, it’s worth noting that the next stamps issued by the Caribbean Netherlands will include a value denominated in U.S. dollars (instead of Netherlands Antilles guilder) and that Sint-Maarten (and also Curaçao ?) will shortly have its own currency!