My next post will be devoted to this extraordinary postcard which was sent from Netherlands New Guinea to Budapest, Hungary. In philatelic circles modern, post-war items rarely make the stage in exhibitions and – especially in the case of picture postcards – collectors of older material simply despise 1950s and 1960s material. And than I’m not even daring to mention postcoded covers and cards…

This item will hopefully prove otherwise. I think it is an extremely rare postcard because of two facts: the country of origin (Netherlands New Guinea) and its destination (Hungary) and the set of postage stamps used to make up the rate to Hungary. We will return to the stamps later on, but first we have to return to Netherlands New Guinea in 1962. In short: the Dutch were willing to hand their last colony in Asia over to Indonesia in the early months of that year. (To read more about the circumstances in which this transfer took place and the history of this short-lived colony, see the relevant text on this website.)

About 12.000 Dutch citizens still lived in NNG by mid 1962, but they were all due to return to the Netherlands. The Dutch army labelled this repatriation task operation spectrum. There were few other Europeans around, especially since the large part of this colony was never ‘properly’ cultivated by the Dutch before. They possessed and exploited Java, Sumatra and Celebes, but Guinea only became of any interest after they lost these more populated islands to Indonesia in 1949.

Now we return to the stamps. In the last 9 months when New Guinea was still a Dutch possession, 9 stamps were issued. Two of them are shown here and were issued in March 1962. The other stamps had the following topics: 1) a single 55c stamp commemorating the silver wedding anniversary of Queen Juliana and Bernhard; 2) 2 stamps commemorating the 5th South Pacific Conference in Pago Pago and 3) 4 semi-postal stamps depicting shellfish.

The stamps applied to our card were devoted to road safety (veilig verkeer). A bit odd since there existed only a small amount of motorized traffic in NNG, but entirely understandable when taking into account the Dutch ‘campaign’ to educate the native people in building their own future. However, by March 1962 it would have been absolutely clear in the Hague that Indonesia would simply annex NNG, rendering this self-awareness campaign quite futile…

Nonetheless, the stamps were issued on the 16th of March. They were designed by P.M. van Lienden based upon photographs of A. de Vos. As Hungary was such an extraordinary destination the complete series was needed to make up the sufficient postage. Either the sender didn’t want to use the regular 55c Juliana ‘En Profil’ stamp or the ‘Veilig Verkeer’ stamps were the only stamps available in Manokwari at the time to make up this scarce rate.

It’s more likely though that the sender didn’t think about the stamps at all; he had more important matters to take care of. E.A. Polansky (according to the Nieuwe Leidsche Courant of 28-11-1960) wanted to study ‘Indology’ in Delft or Utrecht after his secondary education. Since this study became seemingly futile after the loss of the Dutch Indies, it was discontinued after 1949.

Polansky left for Asia nevertheless and became a junior civil servant in NNG in the early 1950s. He studied at the NNG governing institute in Hollandia and became a senior civil servant in Sorong and Selawati. The article in the Nieuwe Leidsche Courant states that Polansky studied non-western social studies at the time of writing (i.e. in 1960) and that he hoped to return to NNG after his graduation.

The article itself features a summary of a panel discussion between 5 NNG experts about a potential independent future of New Guinea. Only a year later this utopia was smashed down by constant threats of Indonesia. This ultimately resulted in the UNTEA-government and annexation.

Mr Polansky probably witnessed these events with profound regret as he truly seemed to have believed that NNG could have become a successful sovereign Melanesian nation. The poignant power play of Indonesia and the U.S.A. aside in the early 1960s, Dutch politics was only starting to invest time and money to take care of the numerous problems which so often troubled underdeveloped colonies back then. A combination of both factors led to the detested annexation.

At the time of writing Polansky resided in Timinabuan, a small semi-coastal settlement relatively close to Indonesia. In this area (Bird Head’s Peninsula) there were some skirmishes between Dutch and Indonesian troops in the early 1960s and especially in 1962. He was senior civil servant in the area and had to inform the Dutch public about the escalating moves of Sukarno in the ‘hot’ May days of 1962. Earlier that year he still lived in the Netherlands, so I expect that he wrote this postcard in Manokwari on his way to his destination.

Timinabuan escaped the destructive force of warfare in the last year of Dutch rule, but nevertheless was shamefully bombed in 1967 by Indonesian troops. By that time Polansky did not interfere in New Guinean state of affairs anymore. During the ‘transfer’ of power (UNTEA) in late 1962 and the beginning of 1963 he acted as one out of eleven Dutch senior civil servants responsible for a fluid transmission of the civil apparatus into Indonesian hands. 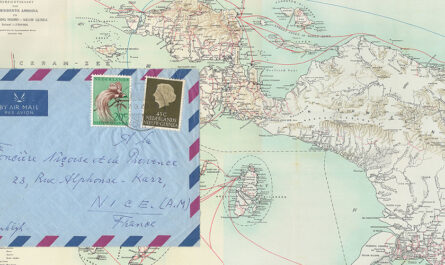 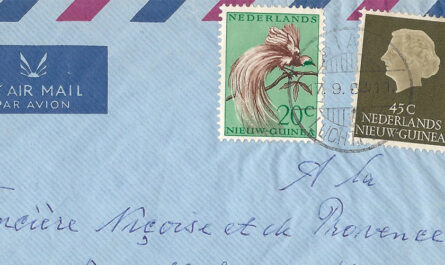