In May of this year I made my annual journey to Gouda to look for some interesting items on the stamp fair there. Many (foreign) stamp dealers, philatelic organisations etc. all assembled in two spacious sport halls. A large stamp exhibition ‘Gouda 2019’ was also organised as well as a regional meeting of the Royal Philatelic Society London and various lectures about philatelic aspects. Recently one of the organizers told me the ‘Brievenbeurs’ as we call it will move to Veenendaal next year due to increasing parking problems around the hall in Gouda.

They rebranded the fair as well – I presume to lure more visitors? – since they advertise with the name ‘Winter Stamps’ now. Maybe the Brievenbeurs with its emphasis on brieven (lit. ‘letters’ or covers) put off stamp collectors only interested in MNH? I hope the new location in Veenendaal will attract even more visitors: I will report my experiences back to you next year. Fortunately my journey to Gouda paid off. I acquired several interesting items and one of them features in this blog.

This rather unattractive postcard was sent from Medemblik to the small village of Jelsum in Frisia on the 31st of January 1880. Since my initial focus during my stay in Gouda was to seek for items within my specialist field (West Frisia, region of Holland), I first didn’t look for the postmarks of the city of Medemblik. I already had identical (and better quality) postmarks of Medemblik of the type on postcard. Nevertheless, after having combed out every dealer’s box for smaller places and towns like Hoogkarspel, Venhuizen and Westwoud and I thought fortune was not on my side this time in Gouda, so I finally turned my attention to the larger cities (Hoorn, Enkhuizen, Medemblik). Maybe something interesting would turn up. Happily I made the right decision.

The postcard should not be seen in a truly philatelic context as the Medemblik postmark (Two-letter type) as stated above is not rare at all. The very faint (quite terrible really) Leeuwarden transit mark isn’t of interest either. So, why did I end up buying this postcard then? The scribbled subscript under Jelsum on the address side made me do it: Dekema-State.

I visited Dekema State in Jelsum about three times already and I was about to make a visit again two weeks after the Gouda stamp show. So I was very surprised, quite literally stupéfait when this postcard turned up: why wasn’t it stored in the Dekema archives for instance? But first let me explain what Dekema State is before I zoom in on one of its 19th century inhabitants.

The small estate of Dekema State with its 6 hectares of adjacent grounds was built in late medieval times as a fortified moated manor house. Written sources from the 15th century speak of a house called ‘Fetsa State’ in Jelsum. State is Frisian for Stins (stone house) and obviously related to the English estate. In 1468 a certain Pieter Camstra became lord of the house and since then it became known as Camstra State. In 1492 the old mansion was demolished in a battle between factions calling themselves Schieringers and Vetkopers. I assume you could see this conflict as a sort of Dutch version of the Wars of the Roses but today only 1 out of 100 Dutch people have heard of this complex civil war. Truly a forgotten history.

Regarding the ruined estate: a new house was erected almost immediately, sadly to be attacked again in the last year of the conflict in 1498. Luckily it survived. Several parts of this late 1490s building are incorporated in the current State. Pieter Camstra’s only granddaughter and heir Reynsck van Camstra married Hette Dekema. The following centuries the Dekema’s and their heirs took care of the building and lands. There name was to last, but the Dekema family disappeared from the gentry stage. In 1791 the family Van Wageningen inherited the place by marriage.

Our postcard was addressed to the great-grandson of the first of the Van Wageningen clan: Gerardus van Wageningen (1764-1852). In 1814 he stripped the mansion from its former glory by demolishing its first floor. A considerable loss of the grandeur of the State, but in those poor economical times it was probably a forced decision. From then on the estate got its current looks. In 1996 the Van Wageningen family handed their mansion and lands over to the Dekema trust, which has renovated the building and took care of its wonderful garden ever since. Today you could visit the estate every weekend between April and October (every day except Monday between mid June and mid September).

Still, according to the New Dutch Biographical Dictionary Jan had literary ambitions. Whilst taking courses in law at the university of Groningen the Frisian writer P.J. Troelstra inspired him to take interest in the Frisian language and folklore. He wrote for the Frisian magazine For Hûs en Hiem (For Home and Hearth) and he ventured to unravel his complex genealogy. There’s where our sender comes onto our stage. Jan Hendrik Hetse always wore Frisian costumes and – according to the dictionary – insisted to be known as a member of the Frisian gentry. A true Frisian landlord I suppose.

To complete his long family tree Jan Hendrik Hetse probably asked our sender about the husband of his great-aunt, daughter of Gerardus van Wageningen: Juliana Lucia van Wageningen. She married to a certain Jacobus Baart de la Faille. Because of his portrait in Dekema State and his exotic sounding name Jan Hendrik Jetse asked preacher Pieter Leendertz for help: back then the authority on Frisian names.

Pieter Leendertz (1817-1880) interests weren’t restricted to God’s words, rather on the contrary as we will see. As a very gifted young man in the Netherlands though there were only limited possibilities to gain knowledge in the early to mid 1800s. He graduated on the topic of Seneca’s death in 1834 from his school to the Academy (University) of Amsterdam. The following year he decided to become a preacher. In 1840 he moved a ‘proponent’ (preacher) from the Seminar in Amsterdam to Woudsend, Frisia. In 1855 he moved to Den Ilp (North-Holland) and in 1864 he moved again to Medemblik where he died on the 10th of September 1880.

We can only guess why Pieter Leendertz chose to become so closely affiliated with the Dutch Reformed Church (essentially as a Theologian+), but I think a position a preacher/theologian gave him the opportunity to focus on his real passion: poetry. He was particularly influenced by the 18th century Dutch Poet Bellamy. His sermons weren’t characterized by heavy dogmatism, but rather by enlightened ideas, ethics, hermeneutics etc. Leendertz really was the odd one out. He researched Dutch Renaissance (play) texts and advocated for a scientific approach of the Dutch language. His knowledge of the Frisian language helped him to understand the Dutch linguistic aspects better.

After he left Woudsend for Den Ilp more and more dignified Dutchmen began to approach and like the self-made professor. They wrote him for numerous reasons: questions regarding faith, Dutch history, but especially matter about the Dutch language and its literary products. He produced a list of Frisian proper-names, old Frisian songbooks etc., but he also took care of a new publication of Dirc Potter’s 15th century Der Minnen Loep. In February 1863 a heavy storm all but ruined Pieter Leendertz. Lightning set his church and rectory ablaze where he kept i.a. valuable manuscripts of P.C. Hooft, his whole library and his thousands of pages of annotations.

He could save P.C. Hooft’s manuscripts but all his other belongings turned into charcoal. His almost ready Scientific Grammar of the Dutch language was gone, musical manuscripts, medieval poems etc. lost for ever. However, with a truly Christian imperturbability he continued his never-ending strife for more knowledge. In his later years he wrote for the Dutch periodical De Navorscher in which readers could ask questions about history, genealogy and linguistic issues.

He also successfully advocated to establish a Dutch organisation for the history of music. Pieter Leendertz was never shy to help readers or effectively any person if they had questions about history and genealogy. He has been characterized as an extremely benevolent responsive man.

No wonder why Jan Hendrik Hetse contacted him then in the last year of Leendertz’s life. Even then, at age 63 (fairly old these days), he was still readily available to help you. They probably knew each other for their shared passions of Frisian folklore and genealogy, although Jan Hendrik Hetse hadn’t even reached the age of 20 when writing him. Pieter Leendertz replied: 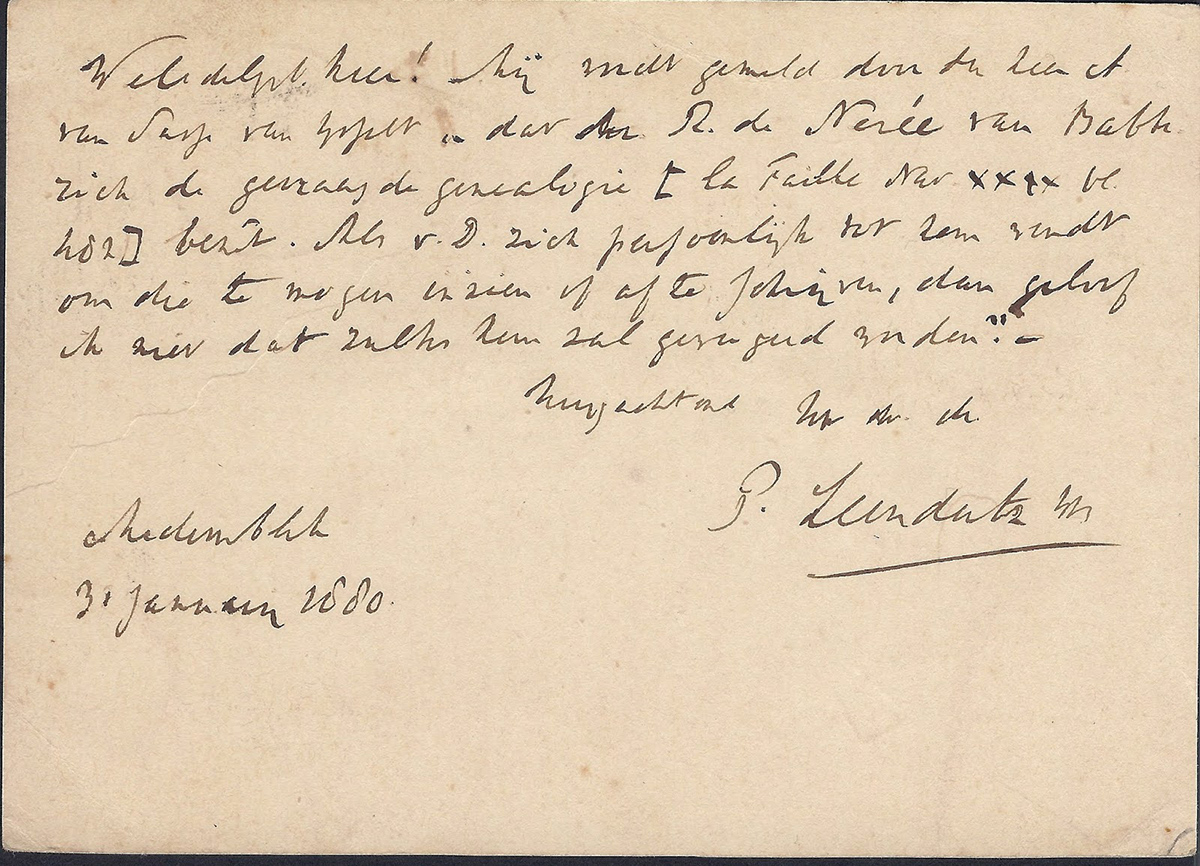 My honorary lord! Me is being told by mr A. Van Sasse van IJselt that R. de Nerée van Babberich owns the genealogy you have asked for [La Faille NW XXXX p. 482]. If v.D. would ask him if he might see it or copy it, I cannot believe this would be refused to him!

Well, one questions remains: who is the mysterious ‘v. D.’ Leendertz speaks of? A middleman, a friend or just an ordinary copier? We will probably never know…