Wervershoof 30-05-1913. Mrs Maartje Hooijveld-Mantel sends a postcard to her niece who lives in the neighboring village of Andijk: 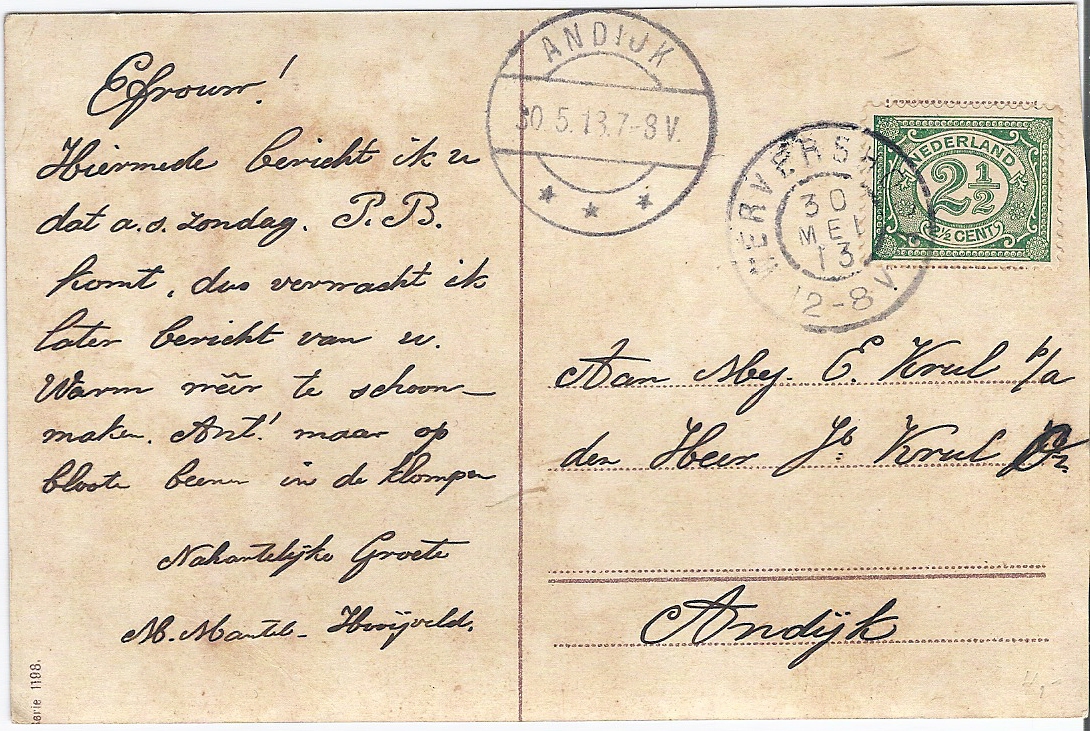 Herewith I let you know that P.B. will visit me this Sunday, so I expect you to inform me soon. Warm weather to do cleaning Ant!, on bare feet (legs) in our wooden shoes it is then.

The postcard is somewhat stained, so the true reason I bought this was the message it contains. Especially the last ‘cleaning’- sentence sparked my interest:

Warm wéér te schoonmaken Ant! maar op bloote benen in de klompen”It is written in ‘pseudo’ West Frisian, to be precise the dialect variant of the Dutch language, not the one labelled as language and which is spoken in the province of Friesland across the IJsselmeer.

A short piece on this dialect can be consulted on Wikipedia but alas there is no grammar available for English readers, so I will show you a couple of linguistic phenomena typical of West Frisian from the handbook “Hé, is dat Westfries?” by the great H. Langedijk:

A peculiarity of West Frisian is the absence of the ‘ge’-prefix for the present perfect: so, “holpen” instead of “geholpen”

In West Frisian the auxiliary verb of ‘to be’ = a form of ‘hebben’ (hewwe) and not ‘zijn’ (bent) as in Dutch. It sounds very odd if you’re not from West Frisia and would be the equivalent of replacing the English ‘haven’t’ with ‘wasn’t’: ‘You wasn’t come with us’…

The real surprise, if you have been paying close attention, is the fact that English uses the auxiliary verb ‘to have’ for the present perfect ‘been’ as in West Frisian but unlike the Dutch ‘to be’.

Enough grammar for now, since the real reason why West Frisian is such a fun language to learn results from its vocabulary and proverbs. It is well-known Frisian is more closely related to English than Dutch and therefore West Frisian has some conspicuous anglophone words as well which are non-existent in Dutch: e.g.

Other wonderful West Frisian expressions (some derive from older Dutch or French words, but other are definitely ‘original’ and very creative):

Dutch: Dat was een welkome verrassing.
West Frisian: Dat was in de emmer.
English: That was a pleasant surprise [That was in the bucket].

Now the grand finale: a proverb which is said of lazy and/or tired people:

There you have it: a small introduction to West Frisian because of Maartje Mantel’s:

Although she tried to make her West Frisian more Dutch, she made one mistake: to place the essential subordinating conjugation ‘om’ before the ‘te’: het is warm weer om te schoonmaken’. But overall, she did a good job: she didn’t wrote ‘skoonmaken’ instead of the Dutch schoonmaken (to clean) and she didn’t wrote ‘biene’ for the Dutch ‘benen’ (legs).

Already in 1913 West Frisians seemingly wanted to speak and write as ‘normal’ Dutch (whatever that means…). After WWII when the Netherlands prospered and West Frisians could afford study and travel, they tried even harder to ban West Frisian because you made yourself look ridiculous in company of more decent people (from Haarlem, The Hague, Utrecht etc.). The rise of television didn’t help much either to preserve the language.

Nowadays you could still hear some reminders of the West Frisian dialect in people’s tongue. Especially the melodious aspect of it and the ‘wrong’ pronunciation of the sch- as in Schaatsen (Ice-skating) which becomes ‘Skaatsen’ is something difficult to get rid of. But the true soul of the language: the vocabulary, typical expressions and grammar have sadly all become something of the past.